reflecting on yesterday’s post, it reads a bit more pollyanna than i intended.

you see, He’s taken me far with grasping His deep deep love for me.  Amy Carmichael’s words; (found in her book; “Rose from Briar”) “Thy Calvary stills all my questions” applies to my questions about His love.  He proved it-He settled it.

but my hope issues of late, they’ve been related to His power, not His love.

it’s so freeing to recognize that i have been assigned only a portion of the pool….or the cliff.

but what i’ve forgotten is that if the people in my world step over me-or get out of the pool and go home, Jesus is bigger than all of that.

The whole head is sick
And the whole heart is faint.
From the sole of the foot even to the head
There is nothing sound in it,
Only bruises, welts and raw wounds,
Not pressed out or bandaged,
Nor softened with oil.  (Isaiah 1)

Jesus plucked me out.  He did it.  He bound and healed my wounds, soothed them with Himself.  He’s broken patterns of thinking and living.  and He’s teaching me all about joy.

but what about when the ones i love dearly, they want none of it?  they remain with their bruises, welts and raw wounds….refusing bandages and the soothing oil of the Father?

i begin to feel like satan is winning.  and that sucks away my hope.  i forget Jesus’ power.

then my pastor shared this story-it’s just a story, (i can’t tell if it’s true- there is a real painting, but no matter-the point is what i needed either way.)  …and it struck again to the question i’ve been asking even tho i hadn’t formed it into words.

the painting shows satan as the winner-checkmate.  the man-lost and desparing.  the way Gary told it; upon further study a man declared; “It’s a lie!  the king and the knight still have moves left!”

the hope of His calling

His incomparably great power for us who believe.  That power is like the working of His mighty strength, which He exerted in Christ when He raised Him from the dead and seated Him at His right hand….  (ephesians 1)

it feels quite foolish, shameful even to have lost sight of how mighty my God is.  but it’s the truth, i did.

the grief over the losses is still there.  but grief with hope is quite a different thing than grief without hope.  He grieves too.

He rescued me.  He continues to rescue me.  it is not hopeless.

He came to bind up the brokenhearted, bring good news to the poor, release captives from prison, to soothe wounds with the oil of joy in place of mourning.  (isaiah 61) His resurrection proves that His ways of doing this are victorious.

There is hope. Christ still has moves left.

He indeed has risen.  that is His best move ever! 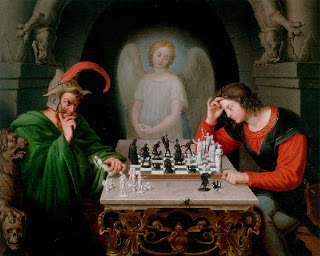 Hope building and The Silver Chair